Posted on October 7, 2018 by Edmonton Houses and Homes
Posted in Edmonton Relocations

In 1904, Edmonton was declared a city. The following year our city was named the provincial capital of Alberta. Today, it is Canada's 6th largest city, offering all the amenities of a major urban center plus a family-friendly environment that is safe, stimulating, and rich with opportunity. Edmonton is one of Canada's most ethnically diverse cities with more than 60 ethnic and cultural groups. Well known for its vibrant cultural life, the diverse business community, and outstanding river valley park system, this is a great place to call home. People who live in here are called "Edmontonians"

Edmonton is located geographical in the middle of the province at an elevation of 668 meters. The terrain is flat to gently rolling, with ravines and deep river valleys, such as the North Saskatchewan River valley. The North Saskatchewan River bisects the city and originates at the Columbia Ice field in Jasper National Park. It runs from the southwest to the northeast and is fed by numerous creeks throughout the city, such as Whitemud and Mill Creek. This creates numerous ravines for living in our neighborhoods.

Edmontonians have a saying here - "If you don't like the weather, wait five minutes" Edmonton has a northern continental climate with extreme seasonal temperatures. It has mild summers and chilly winters. New Buyers sometimes ask "When does it snow?." Truth be told - Edmonton has had snow every month. It is not unusual for tempatures to flexuate 20-25 degrees within a few days. 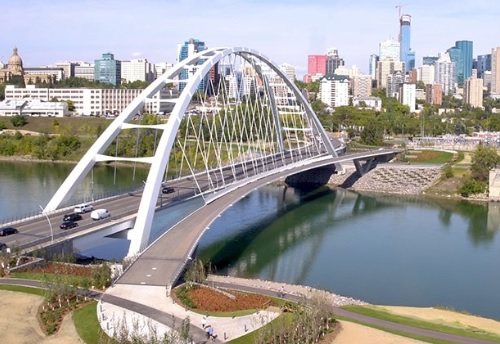 Around 3,000 BC and perhaps as early as 10,000 BC, when an ice-free corridor opened up as the last ice age ended and timber, water, and wildlife became available in the region. In 1754, Anthony Henday, an explorer working for the Hudson's Bay Company, may have been the first European to enter the area. His expeditions across the Canadian Prairies were mainly to seek contact with the aboriginal population for the purpose of establishing fur trade, as the competition was fierce between the Hudson's Bay Company and the North West Company. By 1795, Fort Edmonton, located in the Brander Gardenscommunity was established as a major trading post for the Hudson's Bay Company./p>

During the early 1910s, we grew very rapidly due to rising speculation in real estate prices. In 1912, Edmonton amalgamated with the city of Strathcona south of the North Saskatchewan River. As a result, the city extended south of the river. Just prior to World War I, the real estate boom ended suddenly, causing the city's population to decline sharply from over 72,500 in 1914 to under 54,000 only two years later. Recruitment to the Canadian military during the war also contributed to the drop in population. Afterward, the city was slow to recover in population and economy during the twenties and thirties, until World War II. During this time, Highlands was begining to develop.

The oil boom of the seventies and eighties ended abruptly with the sharp decline in oil prices on the international market and the introduction of the National Energy Program in 1981. The population had reached 521,000 that same year. Although the National Energy Program was later scrapped by the federal government in the mid-eighties, the collapse of world oil prices in 1986 and massive government cutbacks kept the city from making a full economic recovery until the late nineties.

Edmonton has become one of Canada's major educational centers with more than 60,000 full-time post-secondary students spread over several institutions and campuses. The University of Alberta, whose main campus is situated on the south side of the river valley, is a board-governed, public institution. The main campus consists of more than ninety buildings on 890,000 square meters of land, with buildings dating back to the university's establishment in 1908.

Finding a home in our city is not an easy task. Unlike most cities, Edmonton's neighborhoods are extremely deverse. The best way to find a place to live when making a relocation move is to first decide on what type of lifestyle you want. Then choose a relocation REALTOR® who specializes in the community you want to live in.