Posted on May 15, 2021 by Edmonton Houses & Homes
Posted in Best Neighborhoods

Griesbach homes are situated on the former site of the Canadian Forces Base in north Edmonton which has now won the best community award on the local (CHBA Edmonton Region), provincial (BILD Alberta), and national levels. Congratulations to Griesbach developer Canada Lands for winning “Best New Community” for Griesbach at the national level! Canada Lands has won awards at the local level for the neighborhood, but to be singled out amidst all neighborhoods in Canada at the Canadian Home Builders’ Association National Awards for Housing Excellence is an astounding achievement. Congratulations to all residents for making this a beautiful community to live in. 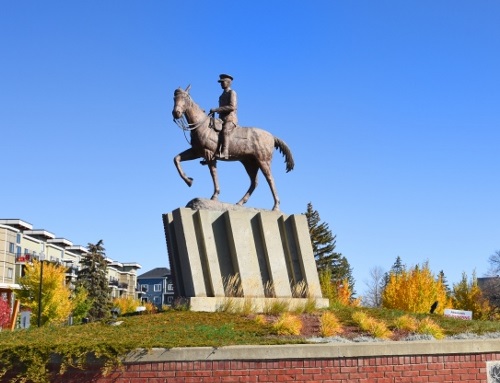 Throughout the Griesbach neighborhood, there are several statues representing our Canadian Military heritage. This is one of the neighborhoods in Edmonton that is always aked about when our military members are on thier house hunting trips.  Learn more about each of these Griesbach statues below:

The Griesbach Edmonton community is named after Major-General William Antrobus Griesbach, a veteran of the First World War, Second World War, and the Boer War. Major General Griesbach stands to watch over the community named in his honor through a statue located on Griesbach Parade and Gault Boulevard. He is depicted riding a horse as he played a key role in establishing a militia cavalry unit based out of Edmonton called The Loyal Edmonton Regiment.

Griesbach was born in Fort Qu'Appelle in the Northwest Territories, the son of Henry Arthur Griesbach, a North-West Mounted Police officer who was transferred to command Fort Saskatchewan in 1883. William Griesbach left the rest of the family in 1891 in order to attend St. John's College in Winnipeg. Upon graduating in 1895, he returned to Edmonton and worked in a law firm and the Imperial Bank, then to study law.

Griesbach enlisted with the Canadian Mounted Rifles in 1899 to fight in the Second Boer War. During his service, he was awarded the Queen's South Africa Medal and received four bars. Upon his return in 1901, he opened a law office of his own.

Griesbach's first bid for political office took place in the 1903 Edmonton election but was more successful in the 1904 election when he was elected to a one-year term as an alderman to Edmonton's first city council placing eighth. He resigned as alderman one year into his term in order to run for mayor in the 1906 Edmonton election. Griesbach was victorious, collecting more than sixty percent of the votes, becoming the youngest mayor in the city's history.

In 1906, Griesbach was commissioned as a lieutenant in the 19th Alberta Dragoons. He was promoted to captain in 1907. When World War I broke out, the Dragoons volunteered as a unit. In December of that year, Griesbach was promoted to major assigned to command the 49th Battalion. He was able to recruit 1000 men in eight days in January 1915. The unit served in various engagements, including the Battle of Vimy Ridge, the Battle of Arras, the Third Battle of Ypres, and the liberation of Mons.

William Griesbach was elected to the House of Commons of Canada as a Government member for the riding of Edmonton West in the 1917 election, defeating incumbent Laurier Liberal Frank Oliver. He served until 15 September 1921, when he was appointed to the Senate of Canada, which he served until his death.