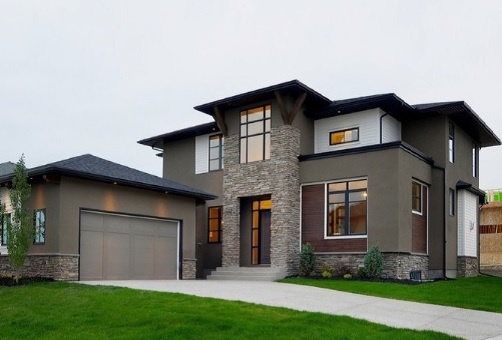 House prices range from move-up to luxury home prices. Unlike any other district in the city, Riverbend offers its homeowners plenty of mother nature's natural scenic beauty with community walking paths and river valley access all within walking distance. Old Riverbend is well known for the popular footbridge which runs across the river to Edmonton West via walking paths. Learn more about each Riverbend community below.

Rhatigan Ridge was first subdivided in 1980 with various house styles from large luxury homes on spacious lots, especially near the edges of the river valley to a range of more modest executive-style houses. Rhatigan Ridge encompasses the Riverbend community league beside St. Mary Catholic School and features a high point of land with panoramic views. Rhatigan Ridge was named after Thomas Rhatigan, a farmer who was famous for the quality of his wheat and oats and was proclaimed World Oat King at the Royal Winter Fair three times.

Brander Gardens offers more deserve homeownership with plenty of townhouses and apartment condominiums to choose from. When originally built, the majority of these condos were focused on the upper-class and elite. Located in the western portion of Brander Gardens are some of Edmonton's most magnificent properties, originally called Glamorgan. Homeowners here are treated with the proximity to the Fort Edmonton Walking trails and Footbridge which crosses to the Wolf Willow Ravine. Brander Gardens was named in honor of George Brander, who established a peony garden in the Bonnie Doon until the 1940s.

Brookside, nestled away from the rest of Riverbend bounded by Whitemud Creek Ravine North with scenic views of our Downtown. Most houses in Brookside are executive-style homes constructed in the 1970s with above-average-sized lots and mature landscaping. Brookside homeowners enjoy the natural woodland habitat, skiing at the Snow Valley Ski Club and Rainbow Valley Park, access to river valley park trails, and other recreational facilities.

Ramsay Heights is Riverbend's oldest community located in a prime real estate location and features a mix of housing equally split between single-family houses and condominiums. Ramsay Heights offers a high elevation vantage point with panoramic views of Edmonton. A large portion of the detached houses in Ramsay Heights runs along the river Valley on 154 Street and Whitemud Road. There are also a few luxury houses located in the original Glamorgan subdivision adjacent to the river valley. Ramsay Heights was named for Walter Ramsay, a principal at McKay Avenue and Queen Avenue School, then became the cities first commercial florist.

Bulyea Heights offers more walking trails than any other Riverbend community and with the presence of the Whitemud Creek Ravine, which runs the eastern length of Bulyea Heights, is the most striking community. Almost every house in Bulyea Heights is owner-occupied with several of these homes touching the edges of the ravines with more walking trails, natural paths for hiking, and run-off streams from the North Saskatchewan River. Bulyea Heights was named after George Hedley Vicars Bulyea, the first Lieutenant-Governor of Alberta.

Carter Crest is a smaller upper-class Riverbend community that features a combination of single-detached housing, construction prior to the 1990s. There are only a few roads in this community that swirl and curve to limit the negative effects of traffic, maximize land space, and allows its homeowners bigger lots. Carter Crest is within walking distance to the Terwillegar Recreation Center and is named after Robert I. Carter, a Canadian government agent who advised Americans on their immigration prospects in Canada.

Falconer Heights is one of the few communities which offer several amenities including a medical center, a library, fast food restaurants, banks, and more located in Riverbend Square. This portion of Riverbend is popular with the aging community and features a fantastic retirement community. There is no school site located within Falconer Heights, but there is a large future school/park site adjacent to Henderson Estates. It was named after James F. Falconer, who was involved in the formation of the Edmonton Names Advisory Committee in the mid-1950s.

The Henderson Estates is nestled between Old Riverbend and Haddow in Terwillegar Heights bounded by the River Valley which runs the length of the community, providing homeowners with excellent access to our greatest natural asset. Due to the natural beauty and breath-taking views, many of these Henderson Estates properties will run into the multi-million dollar price range. Henderson Estates is named after Thomas Henderson, a homesteader in the Riverbend area in the late 19th century who imported Italian honey bees to his farm.

When originally built, Ogilvie Ridge was to be a private, elite, gated community until the city decided, Edmonton against any gated communities. It is bordered by Bulyea Heights, Whitemud Creek ravine, and west by Rabbit Hill. Ogilvie Ridge features a natural topography with an integration of the North Saskatchewan River Valley ravine system defining this community. Ogilvie Ridge was named after James H. Ogilvie, a politician, a lawyer, and a veteran of World War I.